A downloadable game for Windows and macOS

Survive winter in this creepy horror game. Mother loves you!

oh right i played this game and here is something i found weird, i got into the room that mother didn't want me to go, and it was just empty with a rat hole in it. i am wondering if there is more to that or is that just it.

ok so the hole right now before you properly enter the long corridor to the final battle, the mouse hole allows the user to see mother in the bed and the final battle arena,  i suggest those who want to explore it to do it, i am avoiding spoilers for those who do it

as for game play, i would like the sprinting option to be back but moves x2 as fast when going through the rat hole and general movement to avoid mother in the first chase sequence, the thrill to run around the room only to see that it is inevitable, to then hide under the sheets was fun, or even behind the music box again, finding that out was both stupid and fun, because logically you can see someone under the sheets even if there isn't much light in the room, so the kid could be behind the box and look like nothing at all.  there is opportunity for more gameplay or a resume game. a game that shows everything you have done or can do, that will be cool to see in the future. but it is just me, a simple mind learning coding because it is fun to solve problems.

I'm really confused, for the night where she takes the 3rd child you can't sleep and you have to get out of bed, the other side is blocked so I go the other way but the vase breaks either and mother finds you but nothing happens?

I figured it out but when you go to the place where mother kills them you can't do anything about it.

did you run up to the top and hit the red switch, then avoid getting cut by the saws on the silver lines,

I've tried but I can't do it for some odd reason.

im so sad! i really want to play this but it says that the file is demadged :( (im on mac) does anyone have a solution for this? :

Too easy to beat, but anyway I had a lot of fun playing the game! I am trying a second game called "The child"

I love the game!!! The story, the art, the hard work is amazing! I'm really looking forward to your other games in the future!

This game kinda reminds me of The Promised Neverland.

I love it. There is something archetypical in dying from hunger. I like the atmosphere. Fact that after she dies, boy says that mothers beauty WAS unmatched is nice touch. Though i would like to see more details like that. And rat hole is just unused potential. Maybe it could be used to run away without killing mother? I dont have a lot of money right now, but I'll surely buy your next game for every price.  Just come up with similarly great setup.

thanks so much (: the new game is coming out in less than a week!

if game brings you sad feeling and makes you think that means this is amazing game with excellent story, i like this game so much

This game Was Amazingly Creepers!! https://www.youtube.com/watch?v=rjH0JMV8gK8

I loved the game storyline and everything

Got notification about update again but nothing have changed..

Finally got around to playing this game. It was a nice short experience! It left me a bit wanting.  But, it was fun!  I like the pixel art and the style, and Mom is totally hot.

I just wished it had evolving dialogue.  The kids did not care that others were missing at all, and the main character did not update his dialogue on anything he interacted with as event progressed.  It really took me out of it.

One thing I very much appreciated was how generous the checkpoints were for gameovers though! Right back into the action to try again!

This game works sooo slow in my pc plz help

Great game. Loved the creep factor and the atmosphere was so good.

This was really spooky and I loved it <3

Is there actually a way to catch the deer? I tried chasing them, towards the house to trap them on the terrain... but it was too difficult. If there isn't I'd really like there to be an alternative ending where you do manage to feed your family.

It was spooky I guess.

You could have added multiple endings since you kinda spoil the plot in trailer video (bloody mother with devious face) making it obvious she's something else.

How come boys didn't wonder where their brother(s) went?

I dont know why but the ending made me sad but otherwise this games creepy factor was great i really loved it. Oh! and the story was well executed too.

Today we're taking a nice little look at a game about a mother going to the store to get her family groceries. Or at least food. Maybe. Maybe nothing. Maybe something ELSE is the food...

The ending made me feel like Ib, The Witch's house and Mad Father.  Five stars for this game! I really love it!

I just wanted to say that I'm enjoying this game, and that I appreciate all the effort that you put into making it. I hope you are staying safe, that life is treating you well, and that you are doing well.

I downloaded the game, but the file keeps getting scanned by my software security program, and won't run when I try to start it up. Something about not having permission to do so

If it's Windows, there should be a "see info" option, and then a "run anyway" option.

I love the game, can you tell me how much time did it take to create something of this scope? I want to make a game myself, but I don't know how high should I aim considering the fact that I want to make it all assets by myself

It took a couple months. I think you can do it! And thanks for playing (:

LOVED the game. I did encounter a very small bug though:

When you go outside, I believe your brothers are randomly placed? When I went outside for the second time, one of my brothers was standing right outside and I pressed space to talk to him immediately. When the dialogue finished, I couldn't move. Pressing the arrow keys just made my character look in a direction, but he didn't walk. Space bar still opened up dialogue with my brother.

So I restarted the game but got to where I was quite quickly so it wasn't that big of a problem.

Glad you liked it! (: Hm, I thought I fixed that bug. Is it by chance an older download? Sorry about that!

Fantastic game. The music kept me at the edge of my chair throughout the entire game. Absolutely love the ending.

Great game! I particularly loved the music.  Surprisingly creepy for an 8bit game.  Will definitely keep an eye out for what comes next from you guys

I very much enjoyed the game and it's atmosphere. That said, I do have two small complaints.
One is the lack of evolution in the dialogue. That is to say, the brothers don't react when they start disappearing. Or, when you look at your environment, even after discovering your mother's misdeeds, it still says things like "Mother's beauty is unmatched." It'd be great if it changed  over time, becoming narration like "Mother's portrait isn't as pretty as you remembered."
The second is the eating mechanic. By the time you need to do it to progress the story, I got stuck for several minutes. I didn't recognize the plate of food was food because the color matched the desk (the food should maybe be brighter) and there was no indication I was interacting with it when I was "eating." No chewing noises, the food doesn't start to shrink, and also the fact that I haven't eaten anything before, so I didn't know it was a thing I could do. If, on the first day, the boys were give the last of the food supply so you could practice the eating mechanic, that would've been a great help. I know this wasn't just me, as I checked other playthroughs and many other players didn't realize what was going on either.

But I thought it was great stuff. My favorite moment was when you were crawling within the walls. It almost felt like you were breaking the game, in a entertaining way.

Really enjoyed it, loved the art

I've been trying to play this game on my Mac but my Mac says its broken so I can't play :(

I am OBSESSED WITH THIS GAME

The atmosphere, the art. just everything about it is so so amazing. I am sooo sad that it had to end!

A great horror game with a really dark twist at the end. 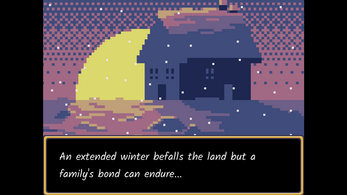 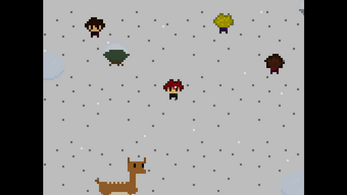 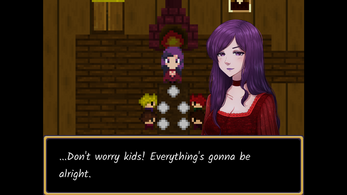